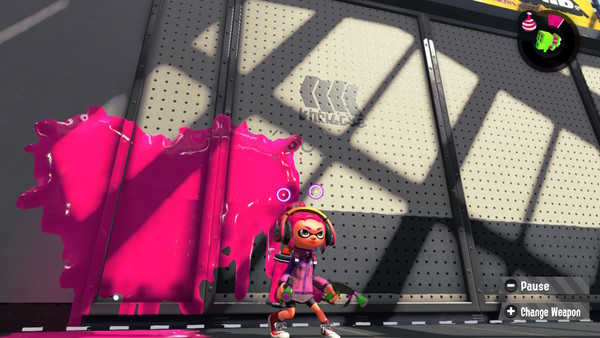 I took a risk on Splatoon 2. Multiplayer shooters are not, generally, something I enjoy, and I'd never played the first game. Also, it's a weird concept: squid paintball? This is Nintendo's new franchise?

It turns out, yes, Splatoon is pretty great. It hits that sweet spot between the neon pop aesthetics of Jet Set Radio and the swift lethality of Quake 3, like a golden-age Dreamcast game decanted onto modern hardware (thankfully, without Sega's torture controller). And yet I'm surprised that there doesn't seem to be a lot of discussion of the game's central design mechanic, which is odd (but maybe common now that streaming has taken over from blogging).

Splatoon is not technically a first-person shooter, but it plays much like one. A typical FPS is about navigation and control of space, although the precise application of this depends on a number of other design decisions: switching from respawning power-ups to hero abilities, for example, emphasizes strategic position over an optimal path. Regardless, like many video games, play is less about the literal violence onscreen and more about range, line of sight, and predicting (or manipulating) the opponent's movement. You very much see this in the 2016 Doom reboot, where monster speed is actually quite low, and all the mechanics encourage players to rapidly pinball from one to the next in a chain of glory kills.

What Splatoon does is take all this implicit negotiation over space and make it explicit, by letting players alter the "distance" of the map with ink. All weapons in the game inflict damage, but they also paint the floor and walls with your team's color. Areas belonging to the other team damage you and slow down movement, while you can get a speed boost in your own color by swimming through the ink with the left trigger. In the primary game mode, you don't win by damaging the other team, although that helps. Instead, the winning team is the one that covered more of the stage floor when the timer sounds.

The paint mechanic is simple, but a lot of really interesting strategy falls out of it:

Since players are effectively redefining space within the geometry of the level itself, and because its weapons are still aggressively short-ranged, Splatoon levels are less like the sprawling expanse of a map from Team Fortress 2 (I suspect the most of them would fit neatly in the gap between that game's historic two forts) and more like Gears of War combat bowls. They're relatively open, with long lines of sight and maybe a few chokepoints to force the teams to interact. The question isn't whether you can find the other players, because you almost certainly can. It's whether you can reach them, and what paths you'll take (or create) to get there.

This leads to one of my favorite moments in the game, at the end of the match, when the screen displays a top-down view of the paint-covered map. It pauses there for a moment to build suspense while you eyeball this Pollock-esque splatter and try to figure out which color covers more area, then a pair of tuxedo cats (don't ask) award the game to "good guys" or "bad guys" (your team is always the "good guys"). But beyond the raw score, you can see the history of the game written on that map: this is the place someone got behind our line and painted over one of the less-traveled nooks, that is the stippling of the ink storm we fired off to clear out that sniper position, and over there is the truncated brush stroke where I was chasing someone with the paint roller when the buzzer sounded. 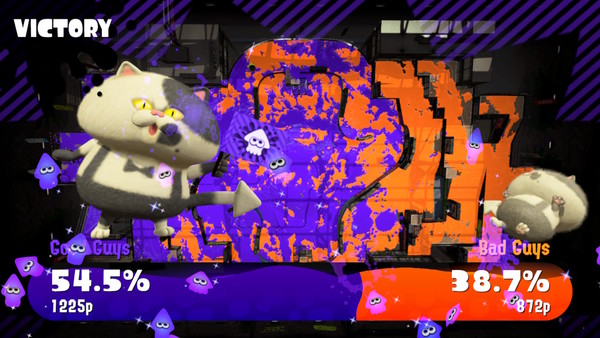 It's been suggested that building a shooter around an oddball mechanic like this is very typical Nintendo: just as they have built consistently profitable business around novel use of less capable (read: cheaper) graphics hardware, they carve out a niche within genres by refusing to compete directly with the standard design conventions. If you want a Halo-like, you have plenty of choices. There are few other terrain-painting shooters to compare (favorably or otherwise) with Splatoon. The closest I could imagine was Magic Carpet — and that's a wildly different game from more than two decades back.

But while this is to some extent true, none of that matters if you can't execute, and Nintendo is very good at execution. The paint mechanic at the core of Splatoon is interesting at a macro strategy level, but what actually makes it successful is that it feels great. Painting every possible surface for your team is a really satisfying thing to do. The art design is bold and colorful (as it would have to be). The music is great, and syncs up perfectly with the timer in the last minute of each match.

This has been a rough year, and the trend isn't upward. Splatoon has, to some extent, become my pomodoro exercise for anxiety: alterating a three-minute round of neon vandalism with a couple minutes checking RSS feeds for our impending doom while the lobby fills back up. The in-game experience is relentlessly upbeat and cheering — even while, apparently, the background fiction is a dark post-apocalyptic story about climate change. Welcome to 2018: even my coping strategies are terrifying.