Since it is election season, when I ran out of library books last week I decided to re-read Hunter S. Thompson's Fear and Loathing: On the Campaign Trail '72, as I do every four years or so. Surprisingly, I don't appear to have written about it here, even though it's one of my favorite books, and the reason I got into journalism in the first place.

On the Campaign Trail is always a relevant text, but it feels particularly so apt this year. In the middle of the Trump presidential run, the book's passage on the original populist rabble-rouser, George Wallace, could have been written yesterday if you just swap some names — not to mention the whirlwind chaos of the primaries and a convention battle. On the other hand, with writing this good, there's really no wrong time to bring it up.

Even before his death in 2005, when most people thought about Thompson, what usually came to mind was wild indulgence: drugs, guns, and "bat country." Ironically, On the Campaign Trail makes the strong case that his best writing was powerfully controlled and focused, not loose and hedonistic: the first two-thirds of the book (or even the first third) contain his finest work. After the Democratic national convention, and the resulting breakdowns in Thompson's health, the analysis remains sharp but the writing never reaches those heights again.

That's not to say that the book is without moments of depravity — his account of accidentally unleashing a drunken yahoo on the Muskie whistlestop tour is still a classic, not to mention the extended threat to chop the big toes off the McGovern political director — but it's never random or undirected. For Thompson, wild fabrication is the only way to bring readers into the surreal world of a political race. His genius is that it actually works.

Despite all that, if On the Campaign Trail has a legacy, it's not the craziness, the drugs, or even the politics. The core of the book is two warring impulses that drive Thompson at every turn: sympathy for the voters who pull the levers of democracy, and simultaneously a deep distrust of the kind of people that they reliably elect. The union of the two is the fuel behind his best writing. Or, as he puts it:

The highways are full of good mottos. But T.S. Eliot put them all in a sack when he coughed up that line about... what was it? Have these Dangerous Drugs fucked my memory? Maybe so. But I think it went something like this:

"Between the Idea and the Reality... Falls the Shadow."

The Shadow? I could almost smell the bastard behind me when I made the last turn into Manchester. It was late Tuesday night, and tomorrow's schedule was calm. All the candidates had zipped off to Florida — except for Sam Yorty, and I didn't feel ready for that.

The next day, around noon, I drove down to Boston. The only hitchhiker I saw was an eighteen-year-old kid with long black hair who was going to Reading — or "Redding," as he said it &mdsash but when I asked him who he planned to vote for in the election he looked at me like I'd said something crazy.

"What election?" he asked.

A Change You Can Haul Away

Well, the election's over. Commence endless speculation about how the Obama presidency is doomed, and will never be able to enact its socialist agenda! Will he govern from the left, or the center? How will he deal with the train wreck that's been left waiting for him?

Now I'm just some guy who works in the city, but I have a suggestion for DC's soon-to-be resident-in-chief if he wants an easy, yet bold, policy fix: get rid of the gigantic concrete security barriers surrounding the White House and blocking off Pennsylvania Avenue.

For those who don't live near the district, here's what I'm talking about: According to Wikipedia, these kinds of concrete blocks--also known as Jersey barriers--were originally invented to minimize the chance that car accidents would cross lanes into oncoming traffic. But if you live or work in DC, you're probably used to seeing them surrounding almost every landmark in the city, as the Wikipedia article drily continues, "as a means to keep car bombs away from perceived targets."

If you see enough of these things--and that's easy enough since they are, literally, everywhere around here--it's easy to become desensitized to them. But take them out of the blind spot for a second and think about what they mean. The ubiquitous Jersey barriers are not just ugly breaks in the landscape that ruin tourist shots of DC's buildings and monuments. They're the physical embodiment of our fears. Each of those barriers is the end result of a train of thought that began with the assumption that our government is under attack from shadowy figures, and ended with fantasies of kamikaze car bombers. It's the same kind of bureacratic panic that leads to the TSA's mindless inspection theater at the airport, checking for high-tech bombs and guns even though the 9/11 hijackers carried nothing more sophisticated than boxcutters.

Now, I've heard tell that once upon a time you could actually drive past the North lawn of the White House on Penn, or the South lawn via E St, but that hasn't been true since I've lived here. Any attempt to do so is blocked by those concrete barriers and police cars. They're even layered--behind the first set, along the fences that already surrounded the building, there's another row of squat, white blocks. For a country that champions its system of representation, the effect is profoundly distancing. Pedestrians are allowed through, but you can almost see the hesitation as they cross the invisible line dividing city from citadel.

You can grow to ignore those barriers, as most of DC's regulars do. But I believe that the fear underlying their placement is not so easily ignored. It forms a pervasive atmosphere of paranoia. I don't know what that means in terms of influence, but it seems hard for me to believe that it has no effect on our policy, and it certainly impacts our image with visitors. Like airport security, the result of so much ritualized watchfulness only seems to breed more fear.

On the other hand, you can do what the Bank did, and disguise the barriers. Visit 1818 H Street today, and you won't see concrete around the World Bank Group buildings, but you will see a series of thick metal posts sunk into the concrete for the same purpose. If anything, this approach is even worse, because it institutionalizes those fears, planting them permanently in the ground, building up paranoia as infrastructure.

No, I don't think these are options that respect the dignity and the openness that lie at the core of American democracy. I don't think they represent us well. And frankly, I don't think they're necessary. Whatever results from the next four years under the new administration, there's no simpler symbol of hope and change than the removal of the barriers around the White House, if not the rest of the capital, to let the people through. 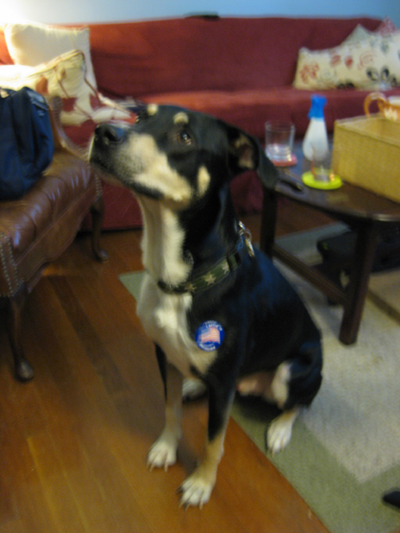 Lines in Arlington were short this morning--much longer at 6am, I heard the poll worker say, but by the time we go there at 7:30 it only took about half an hour. I used a paper ballot and Belle used the machine. We're trying to make Diebold work twice as hard to throw the vote.

Wallace, obviously, does not actually get a vote. But if you give him a sticker, he doesn't know the difference.