In 2013, Google decided to shut down Google Reader, one of a number of boneheaded decisions that the company undertook in pursuit of some bizarre competition with Facebook. At the time, I decided to try an experiment: I'd write my own RSS reader, try it for a few months, and if it didn't work out I'd switch to one of the corporate replacement options.

Eight years later, I still use Weir to keep up with various feeds, blogs, and news updates. It's a deeply personal piece of software — the project that made me fall in love with the idea of code tools that are crafted just for a single person, like making your own workbench or sewing your own clothes.

But I also haven't substantially upgraded or altered Weir in all that time, even as I've learned a lot about developing on the web. So this week, while I had the apartment to myself, I decided to experiment again and build a new client (while mostly leaving the server alone). After I get a chance to work out any remaining kinks, I'll move it over to become the new built-in UI for the application.

I love my curvy UI

The original client was written in Angular 1 as a learning project. It's fine! It's mostly fine. The main problem that Angular had — and which other front-end frameworks have inherited — is that it wanted you to do all your work at a level of abstraction from the DOM, and any problems that couldn't be cleanly moved into the state object would get messy. Browsers were also worse in those days: no intersection observers for handling scroll positioning, inconsistent event handling, no support for easy concurrency with async/await. So there's some awkward behavior in the original client that never felt like it would be easy to fix, because it required crossing that abstraction barrier.

Unsurprisingly, for the rewrite I organized the code via web components — extended from the same base class that I used for Radio, and coordinated over a central event bus similar to the command system in Caret. The only code that translated over mostly unchanged was the sanitization module, which loads each post body into an inert document and processes it to remove ads, custom styles, class names, and anything else that isn't plain HTML content.

What is surprising is that the two codebases are not notably different in size — in fact, CLOC gives roughly the same line counts between the two. Of course, that only includes code I wrote. The original Weir client also requires 80KB of Angular runtime code, which has to be downloaded, parsed, compiled, and run before any of my code shows up onscreen. I'm using those precious first-paint seconds to indulge in a build-free workflow — all JS is just loaded as raw ES modules, and components fetch their styles and markup from individual HTML files instead of using Less and Browserify. It all evens out, but if I decide I'm tired of paying a startup penalty, it's certainly easy enough to add Rollup to the process.

Typically when I go framework-less, the thing I miss most is iteration in templates. It's still a little clumsy in the new client code. But combining Element.replaceChildren(), shadow DOM slots, and elements that act as template partials, it's honestly much less of an issue these days. I could add a databinding function to diff and transition elements, as Radio does for its sorted podcast lists, but (other than the feed management table) there's almost no part of the UI here where view data persists between state transitions, so it's not really worth the effort.

Instead of using a stack of full-window UI "scenes" for different tasks within the UI (such as settings, feed management, and reading stories), the new client is organized in three columns (admin, story listings, and reader). On desktop, they line up side-by-side across the window, and on mobile each one takes up the whole screen, similar to something like Tweetdeck or Mastodon. CSS scroll snap makes it easy to swipe between them horizontally or scroll vertically within the individual panels as their content requires. In practice this gives us a native-feeling, responsive UI pattern with no JavaScript, and it will feel more natural when snap stop is supported to prevent overscroll. 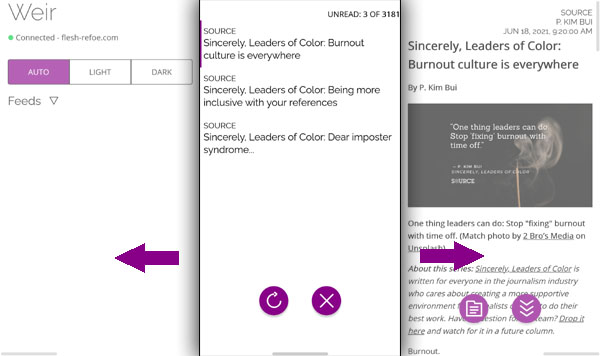 Unfortunately, creating a mobile UI that scrolls in two directions like this means that viewport management is more difficult to handle programmatically. For example, when loading a story into the reader panel, we want to scroll smoothly over to that column from the story list, while immediately jumping within the reader content to the top of the story. In contrast, the story list should scroll smoothly both for its contents (when you use the keyboard shortcuts to select the next item in the list) and when it becomes the primary view on mobile (say, if you reach the end of all unread stories).

Ultimately, the solution was to split scrolling into separate code paths, depending on whether we want to move between columns, or within them. The code still uses scrollIntoView for panel transitions, and modules send a request over the global event bus if they want a different view to take over. The panels themselves are shell custom elements that offer individual control for scrolling content separately from the main viewport — the reader and story list dispatch DOM events up the tree to the ancestor panel when they need their column to scroll vertically to a certain element or offset, with or without an animated transition.

At the start of the process, I didn't intend to do anything to the server side of Weir. It had already been built to handle cross-domain requests, so I didn't need to change anything for local development, and while it has its quirks, I'm generally pretty happy with how it works. Then I hit a snag: the "mark all as read" API route returns a count of stories that were updated, but not the new unread/total story counts. It was just irritating enough that I decided to dig in and make one little change. Of course it snowballed from there.

Since it was as much a learning experience as it was a legit project, Weir doesn't use a typical Node library for setting up its API. I wrote my own request handler and router on top of the basic HTTP module. That part of the code has actually aged pretty well. However, to manage the async chains involved in making database calls and RSS fetches, I wrote a utility library called Manos (because you're putting your code in the hands of fate), and that stuff was a mess.

These days, the ideal way to handle async flow is with the await keyword, so you don't have to write code out of order or in a snarl of function wrappers. But using await requires functions to return promises instead of accepting callbacks, and all of my code was written before JavaScript promises were standardized. So to make it a little easier to insert a db.getStatus() call in a single handler, I ended up converting the whole application to a promise-based flow.

Luckily, I went through a similar process a few years back with Caret, when async/await shipped in Chrome, so I largely knew what to expect. Surprisingly, the biggest change is not in the routes at all, but in the "Hound" component that periodically fetches feed items from various URLs: subscriptions have to be grouped into batches, then each batch is requested, sometimes decompressed from gzip, fed to a streaming parser, and finally saved to the database. As implemented with Manos, the code was at best out of order, and at worst involved a lot of "clever" functional tricks.

The new Hound flow has its issues — I think there's some leftover weirdness from the way old-school Node streams interact with each other that requires pausing the request as soon as it comes in — but it now reads top to bottom, and most of the complication comes from the problem domain and not the language. At some point, updating the request code to use something like fetch() will probably eliminate most of the remaining issues.

There's a truism in development circles that a rewrite is often a debacle — people point to the rewrite of Netscape 4.0 that's blamed for tanking the company, or the Copland OS at Apple. My personal suspicion is that this is survivorship bias: Netscape itself was a from-scratch rewrite originally from the Mosaic browser, and while Copland was not a success, current Mac OS is built on the bones of NeXT, itself a from-scratch OS.

In any case, most people aren't building browsers or operating systems. For these kinds of small projects, I think there's value in taking another run at an idea, armed with knowledge about what worked or didn't work the first time around. In fact, that might be the best argument for these kinds of small projects (API clients, media players, browser extensions): they're a chance to stop, try something different, and measure our skills against our past selves. I learn a lot from these little rewrites, and I think it's safe to say that I am better at this than I was eight years ago.

I still wish they'd just bring back Reader, though.